Lotto-1 Home Contact us Semiconductors Products Projects Videos Lotto Triangle
How To Calculate Your Own Lottery Numbers
This Lotto number calculating technique was designed by Silectronics - 2010 .... Page was designed with CSS Style sheet
The Following Formula I Came Up With Will Calculate Lotto Numbers To 90% Accuracy
1: C = ( 1st10NLow ) + ( 2nd10NHigh ) 2: A = Cderived ( 2nd - 1st ) per set 3: New Numbers = CLog | ( A( xor )Var NL - 127 )
NOTE: ( CLog ) is NOT the Logarithm value of "C".......it describes only a function for variable "A"

Today, lottery numbers are mainly generated by computers .....there is a logarithm or instruction that tells the computer how and which numbers are to be drawn based on what is in it's memory from the last draw and manipulated by the logarithm in such a way as to produce what appears to be a completely random sequence

The only reason that it is random is because they introduce a random starting seed to the numbers in memory....what this means is that there is no way to tell what numbers the computer will generate because of the random seed number....this random seed number can be generated by a number of sources....examples are:....white noise or pink noise from a resistor which is carrying current...-...the natural decay of radioactive substances because only radioactive substances are truly random in nature.....everything else has a sequence to its randomizations

They then convert these decays and noise levels into a digital number which the computer then uses as a starting seed.......although there are many lottery formulas out there that claim that they produce results....the truth is...if you hit....it is only by luck and by chance....those get rich quick schemes don't work period........there is also a machine called a merseigni twister which is a huge shift register computer......it can generate numbers for tens of thousands of years before the whole sequence repeats so unless your able to live for about 100,000 years, your chances of hitting are always extremely thin.........

Your best chance is still luck......but, luck does not have to be left to "chance"....you can make your own luck very easily.....I have worked and analyzed all different aspects using all kinds of math and logic and vibrational math and color charts and an assortment of other ways to try and figure out any type of commonalities between the numbers that are drawn to other numbers that are drawn....despite that there are many common numbers that appear and odds compared to evens and so on , there is just no way to absolutely figure out what numbers will appear on the next draw......but there is a way to come extremely close to the numbers that should appear.....

If you are good at determining the game mechanics then you have a very good chance of always hitting.......game mechanics is the variance of the logarithm that shifts the numbers either 1 to 3 down or 1 to 3 up from the number that should be drawn.....game mechanics is usually controlled by the answer given by the logarithm during its sequence of calculating numbers....it is compared to another number from a shift register and then decides how many numbers it should shift by and which way ...either up or down...........

During my studies, I have found that complicated math is not necessary, vibrational math is not necessary, calculating numbers based on any type of system will produce only numbers based on their fixed calculation of their own logarithms....the result is always .........near hit or for the most part.....always miss.....these programs cannot calculate game mechanics because it is based on random seed numbers which these programs have no way of knowing unless you tap into the lotteries computers....which in itself is extremely difficult because of security blocks........so , the question is then......how can I increase my chances of hitting more than missing?........there is a way.........

I have also worked many years on this to perfect it as good as possible..........the price is only $9.95 for this technique.... it is an extremely small risk to take for something that could finally make you money......I do not guarantee this for anybody and I will state it again.... this system will only increase your chances of hitting your numbers more often than missing ......over 90%.......it is a very worth while investment for such a chance.........

NOTE : before deciding whether you would like to purchase this system , I have added an example below of how my system works so that it will give you a better understanding.

This system has worked for me...over the past 10 years, I have won $47,100.00.....I agree that it is a small amount given the time span , but it is much better than blowing my money with little to no chance of winning other than having luck on my side..

If you decide you would like to purchase and try this system, a full procedural explanation sheet will be sent directly to your email address... Please make sure that you provide us with an active and correct address

The actual numbers that should be drawn according to the result are shown below, but some of these numbers will vary by 1 to 3 depending on the variance applied by the game mechanics

This process works very well with this game -"daily keno" since the computer uses the last numbers in memory plus the variances of the game mechanics to come up with the new numbers.........

How Did I Come Up With The Actual Numbers?

Easy.....it involves simple addition which is then shifted by Applied Logic after derivation......The shifting of these numbers is calculated by a computer ( logic Function ) which will automatically shift the numbers up or down in the correct direction, which is exactly what the lottery logarithms do.

Of course, I did not really play them......what I mean is that I calculated them from the draw on the 17th of november and then picked my numbers in red from the 4 rows above.....I then waited for the next night's draw....the 18th of november ......not so much to my surprise that I found 9 numbers that actually appeared as I calculated....as you can see from above.............just more proof to myself that it does really work.

If you simply added or subtracted 1 to 3 numbers randomly from the actual numbers, then the sequence and direction would have been incorrect . It would have been only a guess as to which way the numbers would shift , you could have been going in the wrong direction to pick your numbers from.......Using my system, the numbers shift properly according to the logic function applied which exactly simulates the computers logarithmic instruction.

How do I know this?.....because as an electronics technician, I can assure you that computers and calculators cannot subtract.....they can only add, multiply and divide.....to subtract, the computer uses a process called "2's compliment" by adding the numbers together.....to multiply and divide, the computer uses what's called "the leading and trailing edges of the clock signals...! Computers !, for the most part do mainly "addition" or "accumulation"...that is their main function.

I will show you exactly how to arrive at the actual numbers and then to apply the variances to come up with the most probable numbers to play.......in a step by step procedure...including examples

I have tested this system thousands of times with very little failure rate.......I have hit and missed.....but have hit more often than missed..........depending on the amount of numbers that I played.......I continuosly won from free tickets all the way up to $10,000.00 quite a few times. I have also used this system mainly for Daily Keno because I live here in canada and have worked out this system for this game here..........I cannot guarantee that it will work for other games in other countries but I can say this.......all computers compute the same way...all computers use binary.......all computers retain some last known computation in memory.....since all computers must have standby power for other components.....most shift registers in computers will either retain their last known states or start from a reset condition and then apply a number which is stored somewhere inside itself.....therefore, this example should work for most......... it may not work for some.....but again, I say......what have you got to lose for a very good chance to at least try?.............try this system my friends........you never know as they say

My best wishes to all.

Below are photos of actual winning tickets dating back to 2002.....The first picture shows a ticket winning $10.00 only but my point is that I keep winning with my system....Sometimes I just win "Free tickets" but still, the money I spend to play is always recovered.Try my system my friends....you can't win if you don't play but to play with a little good help is a much better way...don't you think?...... 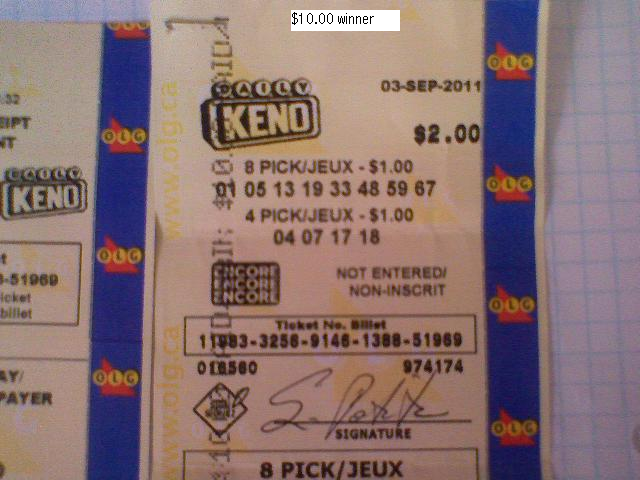 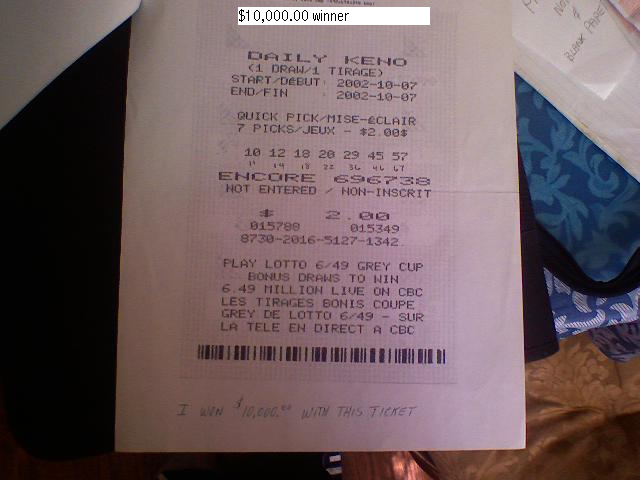 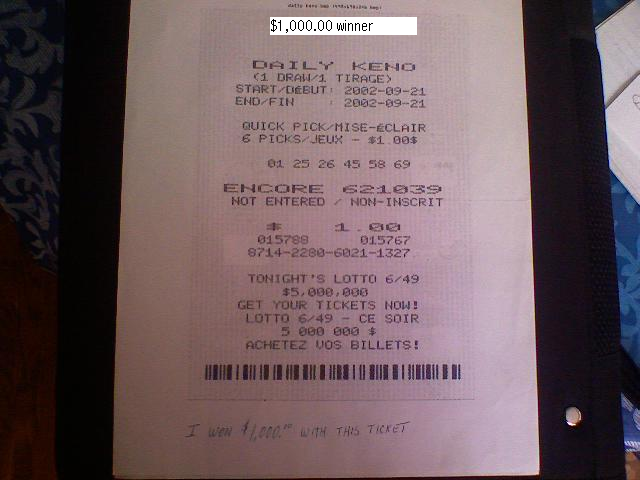 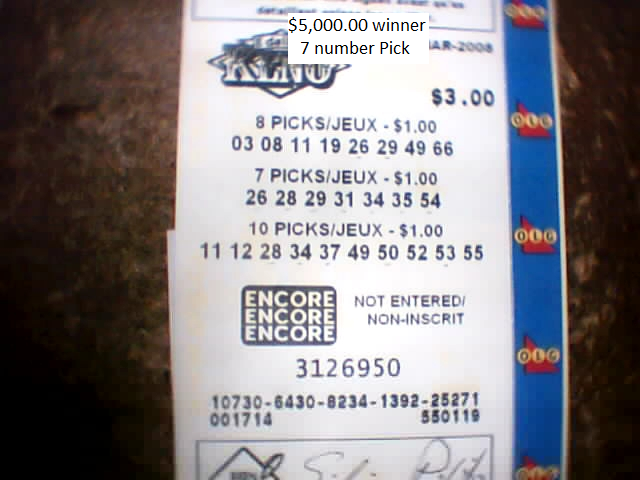